Who says sustainable water retention and nutrient recycling solutions cannot be fun? The interview with Aashna Mittal, one of the TU Delft developers of the WATERAGRI Serious Game proves otherwise by introducing readers to the innovative game concept. The Serious Game is one of 11 creative WATERAGRI framework solutions designed to help stakeholders better understand new technologies being developed and demonstrated as part of the WATERAGRI project. Now, 16 months into the project, the team at TU Delft is working hard to achieve the overall goal of the Serious Game to engage stakeholders and increase the adoption of the proposed solutions. In this interview, Aashna Mittal, tells us more about the game development so far, its original and unique features, and what potential players can expect in the near future of the WATERAGRI gaming world.

How does the Serious Game contribute to WATERAGRI objectives? What can stakeholders learn about the project while playing the game?

The serious game, tentatively named AgriLemma, will increase awareness about water retention and nutrient retention technologies developed in the WATERAGRI project. It will help the stakeholders better understand trade-offs between outcomes of available options and appreciate technologies and solutions developed in the project. Furthermore, since games are an immersive and interactive medium, we hope that AgriLemma will engage stakeholders and increase their acceptance of WATERAGRI solutions.

The game certainly offers a number of interesting possibilities. What exactly can players expect from playing the Serious Game?

AgriLemma is a game about farmers in Europe in the 21st century. The game is a multi-player board game (see figure below) that simulates the world of the farmers, who are faced with the challenge of adapting to the growing pressures of climate change, water scarcity/abundance, and the institutional push for sustainable food production. In the game, stakeholders step into the shoes of a farmer who has to manage their farm. Throughout the different rounds of the game, farmers cultivate fields, plant seeds, harvest crops, maintain their land, and choose to invest in water-saving or nutrient-saving technologies to develop and improve their farm. In the meantime, external influences such as changing weather patterns or actions taken by stakeholders such as the government, consumers, environmental activists, and technology providers affect the farmers in each round. Farmers have to take all of this into account in formulating a strategy to develop a farm that is profitable and sustainable, i.e., a farm with low environmental impact and continuity of the farm in the long term. 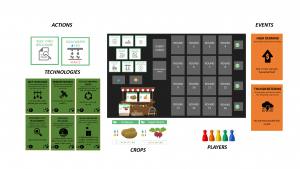 You mentioned farmers as primary players, but who else can engage in the playing process?

The game is targeted primarily at farmers but also the general public and other stakeholders who want to understand the challenges and trade-offs in the agricultural water management sector. Although the players adopt the role of a farmer in the current version of the game, the game can also be played by policymakers, public authorities, technology providers, scientists, and civil society organizations who wish to understand how their actions might affect a farmer.

The game is currently in the testing phase. Could you describe for the readers what this process looks like?

The game is expected to undergo further iterations to improve its concept and mechanics. We organized playtest sessions with 15 MSc students followed by a short discussion to obtain feedback on the game. The players thought the game was fun to play and they could experience the difficulties the farmer has in taking some decisions, like investing in technologies or not. There is still considerable scope to further improve the game and so we are currently working on:

We will test the game further by conducting play-test sessions with WATERAGRI stakeholders in the upcoming project meetings and deploy questionnaires to gauge the level of engagement, change in perception about the WATERAGRI solutions, and clarity of trade-offs.

The WATERAGRI Communication Team thanks Aashna Mittal for such an informative and interesting overview of the Game. We hope that the readers are equally excited to play the Serious Game in the future.